Skip to content
Home » Amps » READ This Fender Deluxe Reverb Review Before You Buy It!

Fender Amplifiers have been a staple for many guitarists with their roots in rockabilly bands and iconic blues. The hand wired combo amp has a long history dating back 5 decades ago. Since its launching in the mid-60s, the rich tube tone of the 65 Deluxe Reverb has been a key factor for just any type of music style. Today, the ’65 Deluxe Reverb delivers classic tube sound in a compact 22W guitar amplifier that is designed for playing on the go. Many love it for its lightweight nature, compact size, and moderate output volume and classic Fender tone. Behold the comprehensive Fender Deluxe Reverb review.  It’s a great amp so we wanted to add it to our reviews!

Who Is The Fender Deluxe Reverb For?

An all-round 65 Deluxe Reverb (built in, not a reverb pedal) with a solid pine cabinet is a favorite amplifier among guitarists who play jazz, country music, blues, rock, and funk. Designed with two channels for cranked-up overdrive and glassy clean tones, it is the perfect amp for recording and doing club gigs. Sufficiently low-powered at 22 watts, the Fender 65 Deluxe Reverb tube amp can crank up for gigs and has clean headroom to cater for most scenarios. It is also made for avid Fender collectors or any guitarist who adores the original versions but cannot afford vintage Fender amps.

An indispensable workhorse guitar combo amp produces full snappy and crystalline guitar tones that are admired in music studios worldwide. Country, rock, and blues players find this moderately powered guitar combo amp a valuable part of their arsenal as it can crank up both in studios and at the gigs. Famous recordings from Abbey Road and Memphis are some of the full snappy tones that custom Deluxe Reverb amp created.

The Fender 65 Deluxe Reverb‘s sound is small enough to maximize the natural tide distortion at a small club yet big enough to get past the muddiest mixes. As such, it is an ideal studio amplifier whose iteration has been utilized by various renowned brands. The two-button foot switch helps to control the vibrato and reverb effects. Its hand-wired tube sockets in conjunction with other parts provide more strength. The resistors and capacitors offer the same quality of the original hand-wired circuitry.

Both the wattage and the weight make Deluxe Reverb roadworthy equipment. The electronics, speakers, and the compact Birch plywood weigh 42lbs only. But this would be of no good is the combo amp doesn’t deliver a good sound. Players get an amazing range of sounds from classic tube break-up to full-clean sound. Professional guitarists find it versatile and reliable. That it doesn’t compromise any sound is the greatest strength. Whether put to action with a music band, the amp offers plenty of volumes to maintain and cut through mixes even with a loud bassist or drummer. The tone is equally pleasing when the combo amp is used on light jazz. 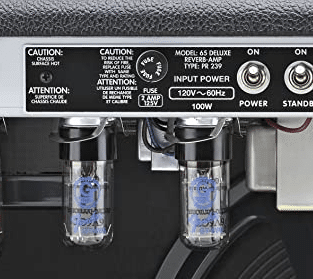 The tonal characteristics of 65 Deluxe Reverb can be described as bright and scooped mid-range (they are the most revered Blackface sounds). The slightly polite amp triggers ‘wine glass’ highs from the speakers and crystal cleans which when cranked up gives over-driven tones. Songs by John Mayer, Jimi Hendrix, and Stevie Ray Vaughan are examples of classic Blackface music that the amp can create. Trey Anastasio, St. Vincent, Roy Buchanan, Bill Kirchen, Tom Delonge, and Chuck Prophet are players who made great productions with Fender 65 Deluxe Reverb.

Apart from the physical upgrades, Deluxe Reverb presents a circuit with better control over the EQ. There are tweaks for driving more headroom from the amp. With additional controls for intensity, speed, and reverb, a dual-channel design makes it easier to toggle between snappy cleans, surf-laden warble, and crisp through the channel selector. Indeed, the amplifier is built with the original specs, making to a timeless amp for Fender tones. Courtesy of the two 6V6 tubes, 5AR4 rectifier tube, 12AT7s, and 12AX7s this 22W Deluxe Fender simply bleeds tube tones. The 12-inch speaker adds a finishing touch on heavy sounds and tone of this amp that have been crafted by this reissued classic Fender to make Deluxe Reverb Reissues.

Here is a summary of sounds Deluxe Reverb can make:

While Deluxe Reverb is good at many things, there are some applications for which it may not be suitable. Sure, it can get that faux-Plexi tone with any Marshall-in-a-box overdrive pedal for your Fender Deluxe. But it may not achieve a lead tone on its own. Furthermore, guitarists thriving in amp-driven environments may find the tube distortion by Deluxe Reverb too stinging or ice-picky.

Any guitar amp of its size usually has volume limits. But this classic Fender amp may not sufficiently fill most of the big stage settings. However, many musicians find 22W incredibly loud. But it would be a versatile option for a modern big-arena stages that guitar amp mic and feed tube amps via monitors.

The ’65 Deluxe Reverb makes a great foundation for the vast majority of over-driven guitar pedals with its general preamp specs and respectable headroom at minimum volume. Most of the Tube Screamers perfectly match with this amplifier since it gives a low-key mid-range to fill in. It is great for anyone who desires pure Fender tones in the absence of a ton of wattage. The textured black vinyl cover and silver grill material gives Fender 65 Deluxe Reverb a great look.

As indicated from this 65 Deluxe Reverb review, this is a very practical guitar amp. Not to mention, the manufacturer gives a warranty period of 5 years to underscore its reliability. There is nothing flashy about it. Its simplicity stands out while the upgraded design offers a great combination of sounds and portability for a professional artist. It still sounds as good for beginners who have just started to play in their own houses.