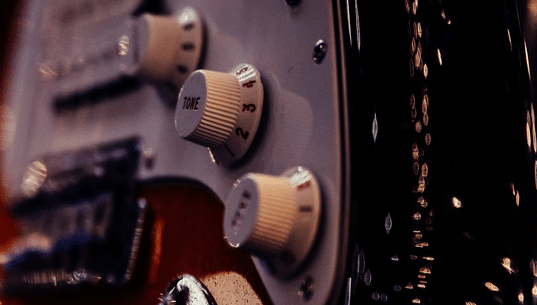 An electric guitar kit has a number of moving parts when it comes to making music, and by understanding those different parts you can better make music.

Part of that is asking, “is a guitar volume and tone pot the same thing?”.  Yes, they are basically the same linear pot but nonetheless there are some minor differences in how they function that can create some major differences in what they can do for the sound of the electric guitar.

By understanding those differences you cannot only play a little better but also deal with issues as they come up on the road, or at least more accurately describe the problem to someone who can fix it. Either way, a little more knowledge about your guitar can only help your playing.

Do Guitar Pots Make A Difference in Guitar Sound?

Look at your guitar….see those knobs?

It is important to remember that an electric guitar’s sound is created by manipulating how the electricity flows through the guitar, and it is that manipulation that creates the sound. The easiest parts of the guitar to manipulate are the pots. “Pot” is short for “potentiometer”, which affects the flow of electricity through the guitar; inside each pot is a “sweeper” that wipes an “element”, or a circular resistor strip of metal. That sweeper determines how far the electricity has to travel to hits its output.

A pot is an L-Pad, or an electrical device that does two things at once. In this case, it is introducing a short and series resistance across the signal. The short dampens the signal; the number on the pot determines the range of the short. For example, if you have a 250K pot you can set that between 0 and 250K, although you may be limited by the actual value of the pot based on its tolerances. Generally, pots come in 250K and 500K sizes; however, the size does not matter for purposes of this article. Just realize that the pot determines how much electricity flows through it and that manipulating that electricity you can modify the sound of the guitar.

How Does A Potentiometer Work On A Guitar?

A potentiometer is a knob that adjusts the resistance across two ends of a circuit. When you turn the potentiometer clockwise, it connects more and more of the circuit to create a greater and greater resistance. Turning it counterclockwise decreases the resistance across the two points in that section of the circuit. This is what allows you to adjust certain settings on your guitar or other device with this type of knob, like volume or tone.

What Is The Difference Between the Two Potentiometers?

Most guitars have two pots, one for volume and one for tone. The volume pot is pretty simple: It affects how loud or quiet the guitar sounds. The tone pots affect pretty much the rest of the sound. The basic difference between the two is how they are wired: Tone pots are logarithmic while volume pots are linear. That is, if you were to look at how they affect electricity, the volume pots would increase in a straight line while the tone pots would increase in a curve. The volume pot effectively lets in a certain amount of electricity while a tone pot, which is wired more like a rheostat, essentially shunts the electricity to a ground. That difference in wiring is what determines the effect the specific pot has on the sound of the guitar.

How Do Volume and Tone Pots Work?

As noted, the volume pot and tone pots work by restricting the amount of electricity hitting their respective systems. With a volume pot, the more electricity you allow into the system the louder your guitar will be. With tone, the low or high frequencies your guitar will play. It should be noted that you can modify the tone by changing almost any other factor of the guitar, from its make to how you strum the strings; there is a lot to play with when it comes to how your guitar sounds. In both cases, you will need to experiment until you find the setting you like the most or works best for your current project. This is just something that you will need to experiment with until you find what you like.

What are Volume Pots on a Guitar?

The guitar volume potentiometer on the guitar is near the volume dial – basically a variable resistor. When the dial is set all the way counter-clockwise the entire signal is sent to your ground, and so your guitar is silent; all the other way and your guitar screams. This, by the way, is why volume is on a 0-10 scale; the number times ten is how much signal is being used. It is possible to deal with multiple guitar pickups; you just need to set your lugs as appropriate to the pickups, with the first lug set as close to the last lug. Keep in mind that if you set that last lug in any other position you lose the ability to control volume; while this is great if you want the highest possible volume, you do lose some subtlety if you decide to play a softer song.

What are Guitar Tone Pots on a Guitar? 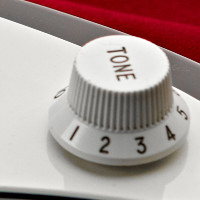 Tone is a lot more complicated, but it is modified by the tone pot. The issue is that while the volume knob only controls one factor, the tone knob monitors so much else; as anything can affect the tone, from how you play to the electronics. You can also use pickups to modify the tone as well. You can also place a tone cap on the tone pot, which also helps modify the tone as well. By turning the tone pot all the way counter-clockwise you generally obtain higher frequencies; by going the other way you can forego the tone cap. Either way, the tone knob gives you a number of options you can play with when it comes to tone.

Tone And Volume Pot Wiring & How To Wire A Potentiometer

As a quick guide to how these are wired in your guitar, I would recommend watching this video that explains it all:

As you can see, it is not a simple question. Nonetheless, this should make playing the electric guitar a lot more interesting to play, or at least give you something more to play with when you are trying to figure out how things work. By putting the guitar more through its paces and playing with the controls you can find new ways to play. It is just a matter of playing with the pots and deciding which sound you like, but at least now you understand how they work and how they can affect your playing.