Skip to content
Home » Blog » WHAT Tubes Are In A Fender Deluxe Reverb Amp?

The Fender Deluxe Reverb is a popular guitar amp created by the Fender Electric Instrument Company. The first Reverb was launched in 1963 and featured the amplifier with an onboard spring reverb tank. While the company has seen many successors since then, like the 64 Custom Deluxe, Vibrolux Reverb, Super Reverb and Fender Twin Reverb, most guitar enthusiasts continue to ask what tubes are in a Fender Deluxe Reverb?

Looking for a best guitar amp or a top tube amp?  Look here.

The Fender Deluxe Reverb features several power tubes for optimal performance and function. With its 22-watt tube amp at 8 ohms, this unit is powered by two power tubes (7408/6V6GT). One of the tubes is a GZ34 rectifier tube (GZ34/5AR4), along with four 12AX7 preamp tube and tremolo oscillation tubes. These are modeled as 7025/12AX7 which power the phase inverter and reverb circuits.

The amp has mainly featured the Jensen C-12Q series throughout the life of its production. This 12″ loudspeaker remains one of the top units across the guitar amp industry. With its 22-watt output, the 6V6 power tubes set can still emit sounds well passed their maximum operating voltage. However, it is important to maintain the proper voltage and input/output of the amp to preserve its performance and longevity.

The amplifier weighs around 42 pounds so it may require some strength to lift it and place it where desired. Even at that weight, however, this amp is considered very mobile and perfect for indoor or outdoor guitar sessions and practices. Over the years, this amp has also utilized Eminence, Oxford 12K5, and Marlboro SE speakers for added performance.

How Many Different Deluxe Reverbs Are There?

The original Deluxe Reverb featured a black control panel with white lettering. This was the style at the time and played a key role in the visibility of the amp. In 1967, the company Fender was purchased by CBS and the amp design changed to silverface deluxe, metallic control interfaces with blue lettering. The hand wired circuit designed remained intact for the most part but the control face was changed a few times for better performance. The original Deluxe Reverb amp was discontinued in 1982, but the second version of the amp was launched that same year.

The Deluxe Reverb 2 featured a 20-watt amp with a sold rectifier and tubes. However, the tremolo circuit was taken out, while the master volume, gain, and other controls were added. The new unit also features two channels, which were designed to be switchable as opposed to the original version. This amp was discontinued in 1986 but did draw good ratings from guitar players and enthusiasts of all levels alike.

2013 also saw a limited edition run of the Deluxe Reverb reissue. This, however, was only as amp head, which had done been done previously. This version has the speaker built-in, which made it incredibly convenient for guitar playing lovers. The following year, this model was added to the regular product inventory of Vintage Reissue amps. The silver cosmetics also saw a return on the company’s 1968 Custom Deluxe Reverb amplifier. This release saw great reviews partly due to the construction and aesthetic appeal of the amp overall.

I will also mention the Blackface combo guitar amplifier model that used the ab763 schematic.

What Exactly Are Amp Tubes? 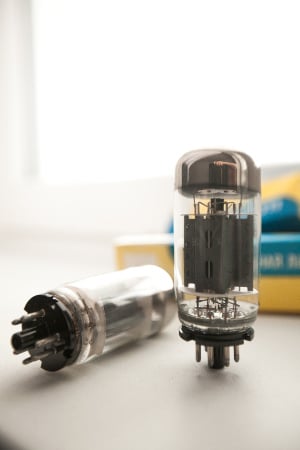 Amp tubes are essentially valve amplifiers that increase input or output signals. For guitar players, they use tube amps since they enhance tone and pitch. This is known as timbre across the musical instruments industry and may include sound distortions or pitch colors for designation and quantification.

Valve tube sounds in guitar amps are considered more pleasing to the ears than conventional transistors. These tonal sounds are considered the industry standard for professional guitar players and even audio experts that specialize in microphone pre-amp setups and settings.

Tube amps tend to respond differently than transistors when signals are approaching. In tube amps, the amplification is less abrupt so get fewer distortions of sound. Transistor amps tend to have more sound distortion — especially when the signals reach the levels of clipping. In the guitar-playing community, tube amps are considered more aesthetic than solid-state amps. Yet, the debate between the two amps continues among guitar lovers today.

The Fender Deluxe Reverb remains one of the top guitars amps ever produced. Regardless of the model, these units have — and continue to receive stellar industry ratings and player reviews. From guitar professionals to novices, the amps are ideal for indoor and outdoor play. However, it is important to follow the instructions on how best to set the amp for tone, pitch, and performance. There are several online videos that show guitar lovers how best to utilize these amps for live performances or practice sessions.

Want more info on Fender amp?  Look at this article on the 6 Best Small Fender Amps.