Skip to content
Home » Blog » LOOK: Why Do Guitars Have Multiple Pickups? 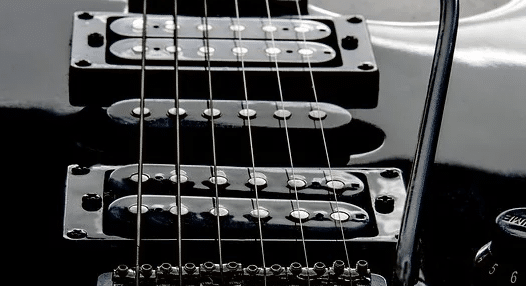 When pickups were originally employed in guitars, the greater objective was to make the guitar sound louder than before. Multiple decades later, modern (electric) guitars not just sound different from their ancestors (acoustic guitar pickups) but the sound they create also paves way for a completely new form of the best electric guitar music.

Electric guitars have multiple pickups (two or three typically) because each pickup is set on a different part of the guitar’s body giving it more tone control opportunities.  Switching between the multiple pickups in each position or a combination of pickups in multiple positions allows a guitar player to create many different guitar tones with just one guitar.

How Do Guitar Pickups Work?

To create sound, electric guitars electronically sense the strings’ vibrations through the vibrating string and move an electronic cue to the amplifier. The signal then gets amplified to a degree that’s capable of driving audio speakers. By creating soundwaves, the electronic signal is converted back as mechanical energy, thereby mirroring the behavior of the string.

The sensing happens within a magnetic pickup (like these best Stratocaster pickups) that’s mounted beneath the strings located on the body of the electric guitar. This pickup comprises a bar magnet that’s wrapped with close to 7,000 fine wire turns. Like how magnets and coils make motion out of electrical energy in electromagnetism, they do so in the guitar too. In a guitar, the pulsing steel strings churn out a subsequent vibration in the magnetic field of the magnet and a vibrating energy flow in the coil, as a result.

There are several guitar pickup types. Each pickup type has its unique sound, and more than one pickups could be paired to produce an extra set of variations. For instance, certain pickups extend a magnet bar beneath all six strings. The other types have a dedicated pole piece in place for every string. A good number of electric guitars come with two or more different types of pickups situated at different places on their bodies.

The multiple pickups in a guitar significantly impact the sound signature of a guitar, and you could be leaning toward a particular tonal style or character before you pick a guitar up. The more pickups you have, the higher the tonal possibilities.

There are a couple of major pickup types to select from: single coil and humbucker (two coils). There is no right or wrong pickup type between the two. It’s purely a matter of preference. A standard electric guitar would have a minimum of two multiple pickups. However, things come down to the type of music you come up with. Some come with two single coils and one humbucker with two coils together. And then some guitars would have two humbuckers and one single pickup.

More info on the types of guitar pickups here.

Also check out – what is a microphonic pickup?  best humbucker for blues.

Electric guitar pickups happened during the 1930s. When the guitar was evolving as a lead music instrument, single-coil electric guitar pickups started to appear. These pickups function like little antennas, picking different kinds of electromagnetic interference typically heard as a ‘hum’.

A single-coil one pickup usually has a crisper, brighter tone. Single-coils are usually described to have more attack and “bite” compared to humbuckers. Also, they could sound “gritty” when pushing a tube amp into overdrive. Based on the amp type, playing techniques and effects used, single-coil pickups could also churn out chiming, glassy tones that are usually identified with the classic pop guitar of the 1960s. Barring all types of exceptions, a single-coil pickup is usually preferred by surf and country guitarists who look for maximum twang.

As guitarists started to turn up their amp and guitar volume knobs, hums and buzzes grew louder as well. To remedy this issue, humbucking pickup was introduced during the 1950s. Humbuckers comprised a couple of coils with phased-out wiring. This results in the hum created by a coil only to be negated by the second coil.

As far as sound is concerned, humbuckers typically have a “thicker” sound. It’s usually perceived as warmer and rounder by guitarists. Also, humbuckers tend to accentuate the sustain the guitar’s tone woods produce. Humbuckers tend to be liked more by jazz, metal, and heavy rock players. With their midrange emphasis and a wider distortion effects (likes these top pickups for metal guitar) spectrum, humbuckers are fancied by blues players as well those who prefer overdriven tube sounds.

As mentioned before, humbuckers, like a Stratocaster with humbuckers, come with a couple of coils. Some humbuckers let you split or isolate one of the two coils, offering you a sound that’s reminiscent of single-coil pickup sounds. Coil taps are made by wiring a particular switchpoint within the coil to a button or switch that regulates it. The switchpoint is chosen to offer distinctively unique sound from the complete coil winding, offering added versatility to the pickup.

When humbucker pickups first graced the stage or showed up in guitars, they came with a sticker that read “Patent Applied For”. As a result, they were thereafter commonly referred to as “P.A.F.” pickups. The humbucker design has seen multiple variations over the last 50 years. Yet, a lot of professional guitarists fancy the P.A.F. sound more. Also, pretty much all double-coil guitar pickups are called humbuckers. However, they are at times wired to offer the choice between humbucking and non-humbucking operations.

Why is the Single-Coil Pickup Still Relevant in the World of Humbuckers?

Provided the quiet performance and great sound of humbuckers, single-coil pickups are still preferred by certain guitarists over humbuckers. This is primarily because single coils sound different and great in their own way. Single coils are usually crisper and brighter, with increased definition of note between strings. Humbuckers, on the other hand, are usually darker, louder, and heavier.

Certain guitarists have an affiliation for a particular pickup type. For instance, the sounds of Stevie Ray Vaughan and Jimi Hendrix were almost exclusively created with single-coil guitar pickups; whereas Joe Perry, Slash, Billy Gibbons and Carlos Santana are usually synonymous with humbuckers. Other guitarists have depended on both these guitar pick-up types. Eric Clapton played with humbuckers during the early stages of his career with Cream and Bluesbreakers. However, he shifted to single-coil pickups at the time of ‘Layla’.

Pickup placement on the guitar is most certainly among the most influential aspects of the electric guitar sound. The general rule of thumb is that the further away pickups are on a guitar, the better the sound variety from the instrument. And the nearer the pickups are to the hollow string vibration, the cheerier the sound would be. Also, the volume and bass would be richer. If the pickup is in close proximity to the bridge, the sound would be much better than normal.

Most electric guitars come with two or more different pickups situated at different locations on the body. The actual locations of the pickup vary with the guitar design. The telecaster single-coil (not the Telecasters with humbuckers) pickup, for instance, has two single coils: one at the neck position, and the other on the bridge regardless of the electric guitar bridge types. The neck pickup helps churn out a mellower sound. The bridge pickup, on the other hand, produces a sharp, extremely twangy tone with overstated treble response, because the pickup is fitted on a metal plate.

The standard Stratocaster electric guitar design comes with three single coils. You could choose which pickup or pickup combination to go for with the lever switch. In this design, the pickup positions get referred to as neck position, middle, and bridge position pickups due to their physical closeness to those specific instrument parts. The output of the neck pickup is usually the lowest, with the maximum bass and mid-range response.

The bridge position pickup offers a higher output, due to the restricted movements of the strings, and the maximum treble response (with some twang to it). The middle pickup’s sound is similar to the neck pickup’s sound, but with slightly more treble and less bass. Modern Stratocasters have pickups at five positions.

If you are particularly concerned or wary about the number of pickups or their positioning on a guitar and their impact on sound, make sure the pickup placement is as far as it possibly could be from one another to reap in the benefits of the best possible timbre variety.

An electric guitar pickup’s frequency response has a lot to do with its magnetic aperture and physical positioning. If you are out in the market to buy a guitar and you’re not sure which guitar pickup type or design to select, it’s recommended you pick a guitar that sounds the best to your ears. Even if your favorite guitarist or musician uses a humbucker with two coils, you should not be inclined toward it if its sound signature doesn’t appeal to you much. Moreover, things also boil down to the kind of music you intend to play on the instrument. If you’d like to play some heavy metal, a guitar with a humbucker pickup would be ideal. The pickup configurations on offer are varied. Moreover, different guitar manufacturers may employ different materials and proprietary construction methods, which could end up playing a role in how the guitar sounds after all.

2 thoughts on “LOOK: Why Do Guitars Have Multiple Pickups?”