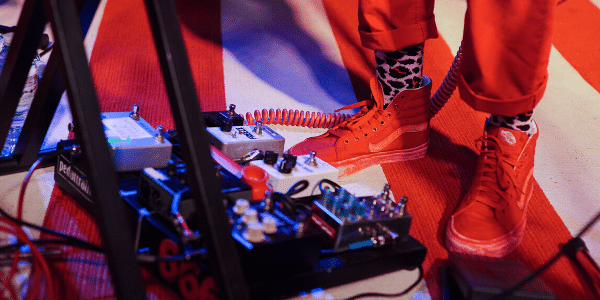 It’s considered the most significant step in the guitar world: The birth of guitar effects. Offering an easy way to tweak various aspects of one’s sound, effects pedals opened up a whole new range of types of possibilities for guitarists. Anyone could now develop unique tones never heard before, with some further using pedal effects to carve out new niches.

Perhaps the most significant guitar effect is the distortion pedal. This intentionally distorts the incoming sound to provide a little extra ‘oomph’. While some amplifiers offer the same capabilities, most players still opt for the ‘stomp box’, as the effects pedals are commonly known

If you’re just getting started with electric guitar, distortion pedals can provide a great stepping stone for you to expand your skills. If you know how does a distortion pedal work.  With that in mind, it behooves to you to take a look at the different distortion pedal types.

So which should you add to your signal chain to get that holy grail ?

When you want to add some punch to your sound with minimal effort, the humble overdrive pedal is your best bet instead of distortion. It was originally developed as a way to stimulate a tube amp that’s been cranked all the way up. At this level, the tube amp’s tubes will be teetering on the edge of breakup, and the sound will become more raucous as a result. An overdrive basically mimics the same effect in a safer territory. These pedals yield the sound of a distorted amp without putting your eardrums at risk.

What Does An Overdrive Pedal Do?

Now, this will sound a little too obvious for seasoned guitarists, but it’s worth pointing out that the overdrive effect is not meant to melt faces (like perhaps an over-driven amp would). Rather, it’s designed to provide a smoother, more dynamic style of distortion effects guitar pedals. The actual pedal effect will usually wait for you to start playing hard before kicking into action; play softly, and you’ll barely notice any gain.

Consequently, overdrive pedals tend to feature 2 gain stages: input volume (how hard you play), and output volume for driving the rest of the signal path. Controls have historically been limited to a tone knob for cleaning up high frequencies. However, today’s overdrives may also include bass- and treble-shaping controls. Some overdrive distortion options can even be tailored to bridge the gap between other stomp boxes on the pedalboard.

As an example, I mentioned an Ibanez Tube Screamer pedal below in the distortion section, but it falls here as well if you want your guitar overdrive sound like heaven. Other excellent option is the Tubescreamer or Fulltone OCD, Boss BD2 Blues Driver and the Proco Rat.  Check out the MXR brand too.

Okay, enough with the smooth and subtle — There are certain times when you want the most expressive, most exaggerated types of effect available. One that distorts your guitar’s sound to the point where it’s no longer recognizable.

Jimi Hendrix was well known for the use of this effect with the Fuzz Face. Kind of part of his signature sound. There is also a good choice of the Electro-Harmonix Big Muff Pi.

What Does A Fuzz Pedal Do?

There’s really no way to describe the fuzz effect in simple tone control terms, but you can think of it as overdrive’s berserk sibling. It’s the sound of an amp that’s been pushed way past its limits and into alien territory. Rather than retain the guitar’s original sound, a fuzz pedal utilizes a technique known as square-wave clipping to create a thick, fizzy and very noisy guitar tone with these pedals. Imagine the sound of a large Velcro strip being torn apart, but way more bass-heavy.

Fuzz boxes produce such an extreme level of distortion that their musical capabilities are rather limited. They’re generally reserved for single-string riffs and lead lines; anything else risks sounding too weird, or even overbearing. But if you’re the type who likes to add a dose of unpredictability into your performances, a fuzz box pedal can be worth its weight in gold on the stage, offering everything from woolly thickness to utter mayhem types of tone from these pedals in your pedalboard.

Stacked between the ball peen hammer and the wrecking ball is the good old distortion pedal. This is a must-have for any guitarist worth their salt, and for good reason. It’s the most effective distortion tool for injecting life into a performance. Not to mention that it is the most versatile of all stomp boxes — whether you dabble in blues, grunge, rock, or anything in between, a distortion pedal can be your most formidable weapon pedals on stage.

The first distortion on the market was probably the Dallas-Arbiter Fuzz Face Distortion. The name actually makes me wonder if it was also consider a fuzz. But there are other popular options like the Tube Screamer (The Tube Screamer in my opinion is one of the best distortion options for hard rock) or if you are into heavy metal distortion, the Boss MT-2 Metal Zone Distortion. The Boss DS-1 is also an excellent choice.

Looking for other guitar pedal options to add to your pedalboard and guitar signal?

What do distortion pedals do?

The distortion effect pedal basically takes your signal and injects a generous dose of crunch and sustain. This results in a much more aggressive sound. The output signal can be tweaked to contrast the natural sound of the guitar, or even conceal the distortion altogether.  One of my favorites is the Boss DS1 distortion to include on your pedal boards.

Do you need a distortion pedal?  Take a look here.

What is the difference between an overdrive pedal and a distortion pedal?

So, how can you tell a distortion box apart with differences from the other members of the family, given the shared umbrella term for musicians? Distortion pedals tend to have more in common with overdrives than with fuzz boxes. But while an overdrive simply adds gain to a clean tone, the distortion purposefully clips and distorts the original waveform to create a heavier, more pronounced sound. Most different types of distortion are also designed to vary their output in response to the kind of guitar used – electric or acoustic guitars.