Skip to content
Home » Blog » Should I Get An Overdrive Or Distortion Pedal? 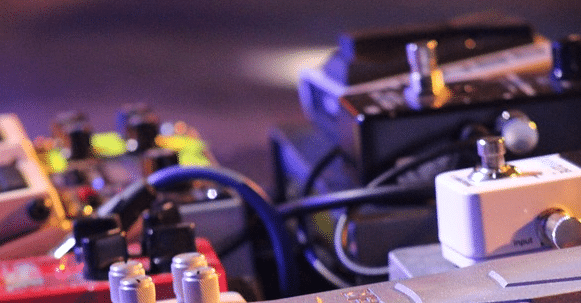 Guitarists can experiment with different styles to find ones that suit their preferences. They can try various techniques and use countless tools to achieve their desired sound. For example, pedals can be used to produce interesting effects for a guitar player while they play.  They can also choose to incorporate different pedals and effects like distortion and overdrive.

These pedals change the output by playing with the signals and their frequencies. Sometimes the effect is subtle and other times the effect is obvious. It is easier to mimic the guitar solos of certain musicians if you employ the same tools and techniques that they used to play. The two most commonly used effects are overdrive and distortion.

Although the two are often interchanged, they are actually two distinct overdrive effects. You also need separate hardware to induce each. Historically, overdrive is the effect of cranking up a tube amp. This type of amplifier was the norm back in the day and musicians discovered it by accident. When they tried to feed too much power to the guitar amps (solid-state or tube amp) in an attempt to increase volume, they ended up with clipped guitar’s signals, also called hard clipping. The upper portion of the wave gets flattened as the limit of the hardware has been reached. This might sound bad but the sound produced can actually be good if used the right way.

Tube amps naturally create overdrive when you push them hard. That’s why musicians playing the blues in the past and in the present just try to get the effect with their guitar amp. This soft-clipping lends itself well to their genre. It changes the sound but not by much. You get a good balance between the original tone and the new harmonics. These days, however, most musicians would rather use overdrive pedals to get the same effect. This means they don’t have to carry big tube amps or worry about its fragile handling. Technology recreates the clipping with virtually no difference in overdrive results.

When is Overdrive Desirable?

You might want to add overdrive vs distortion to your electric guitar tones arsenal if you want your music to get a slightly different texture without making the piece unrecognizable. This is a great thing to have if you are fond of playing classic songs from country, blues, and garage rock. You will find countless bands using overdrive. Aside from the soft-clipping effect, it can also serve to boost the volume of the signal by a little bit. In this scenario, it works as an alternative to a boost pedal. Finally, you may use overdrive pedals for in conjunction with distortion pedals to increase the latter’s high gain. You will be able to boost volume and sustain for a long time which is perfect for solos.

Also check out this article on using an overdrive in the fx loop.

Some people are not satisfied with subtlety. Do you need a distortion pedal?  They want a certain effect and they want to hear it loud. The distortion effect is a nice choice for them if they like full and rich sound that this creates. You get the main note and several dissonant frequencies that that clash with one another. Surprisingly, this clash sounds pleasing to the ears with its raw appeal. It is the favorite effect of many rock bands because of this complexity and tone. It can even be said that distortion is the trademark of hard rock and metal. This can be used in other genres as well since you can play with the amount of distortion imposed on a signal. In contrast with overdrive, distortion pedals introduce a hard clipping at the top.

It is possible to get this kind of effect using just the overdrive pedals but you have to push them extremely hard to get there. You risk losing control when you try to go beyond the capability of your hardware. This is one of the reasons why it is much more advisable to use distortion pedals instead. Get the effect without breaking any sweat. Have better control of distortion while you are at it.

When is Distortion Desirable?

You can use distortion at any time with any piece to give it a distinctive edgy character. The music will suddenly have more depth and force behind it thanks to the volume boost and the many overlapping frequencies, as well as the longer sustain that you can get. Increase the distortion and you can enjoy more complexity and sustained notes. If you are trying to play songs by heavy metal bands, then you really have no choice but to use this kind of distortion effect to mimic the sound.

Also check out fuzz pedals too!

You need to purchase the guitar pedal that will take you closer to your goals. If you want to sound like a competent blues artists, then overdrive is the obvious choice between distortion and overdrive. If you want to do more rock, then distortion is the way to go. Learn to master these pedals to take full advantage of their capabilities.