The headstock is the part of a guitar where the machine heads are mounted. The shape and size of headstocks can vary depending on the manufacturer, model, year of production and original era. For instance, ’50s Gibson Les Pauls have a pointed headstock where Fender Stratocasters from the same era have a more rounded design.

There are many different guitar headstock shapes depending on manufacturer, model and year of production. These shapes can include anything from thin pointy to rounder bottomed headstocks.

*Also check out – how to repair a broken guitar headstock

What I think of a “pointy” headstock, I tend to think about hard rock guitars like Ibanez, Kramer, ESP, etc. Many shredders and rock players prefer this type of headstock because it gives them a great balance of attack and sustain. Pointy headstocks provide plenty of attack, while more rounded designs tend to be heavier on the sustain. The amount of “pointiness” will vary from manufacturer to manufacturer, but generally pointy designs feature a sharp point going straight back with no tapering. 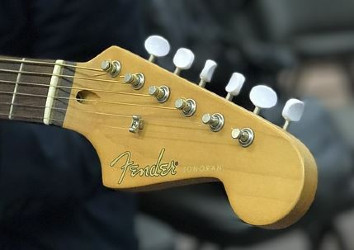 A rounded headstock has a more circular appearance that tapers at the bottom and sides. While most people think of Fender Stratocasters, this type of headstock is more common on lower-end guitars.

Rounded designs are not the standard for most manufacturers, but are more popular in lower-end guitars than pointy designs. Many players will have a rounded headstock so they can tune them up easier, and because these guitars look prettier with the headstock rounded. A rounded headstock can also be had on guitars with tuners mounted using a modern bridge. 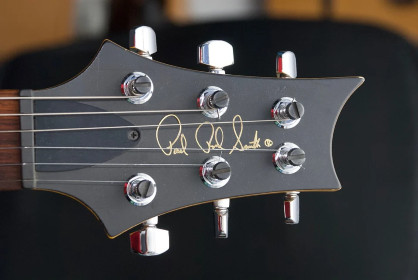 While the shape of square headstocks can vary, these designs have a square cross section where the machine heads are usually mounted with 3 tuning pegs on each side.

All of the examples above for a pointy or rounded headstocks are much more common, and most guitars are based on one or another design. There is nothing wrong being built around one shape or another. Many guitar manufacturers have their own unique designs. In fact, Gibson has several distinctive shapes like the Les Paul Standard and SG Classics.

The point is that headstock shape should be a personal choice. You should choose the shape that you think looks the best, sounds the best, and feels good in your hand. Some of the styles above are actually more practical than others if you plan on playing a lot of different genres of music.

How Do You Shape A Headstock?

This video is worth checking out if you’re interested in learning how to improve your skills on shaping guitar headstocks.

There are many different methods for shaping and finishing a guitar headstock. The only way to get it right is to practice. I’d recommend holding a pencil up against a headstock and seeing how much back the pencil extends past the face of the headstock as it meets the neck.

In conclusion, there are many different varieties of headstocks on guitars, but most of them are based on one of two shapes: pointy or rounded. Pointy designs provide more attack and sustain from the strings while rounded designs provide a more smooth sound with less attack. A lot depends on preference and what you want out of a guitar in terms of sound.