Acoustic guitars are fretted musical instruments producing sound through vibrating strings over the hollow chamber on the guitar body shapes. Vibrations are carried through the air without requiring electrical amplification through numerous acoustic guitars that function as electric guitars.

The main difference between a grand auditorium and dreadnought body is the shape of the guitar. A grand auditorium is a larger version of a dreadnought shape but a wider waist size. Dreadnoughts are shaped more traditionally. Both play the same, but the sound between the two best acoustic guitar shapes can be quite different.

The majority of acoustic guitars include six strings. A common variation is a 12-string guitar, where every string is doubled with another string that sounds identical pitch making a rich and beautiful chorus effect. Players of acoustic guitars produce sounds with both picks and fingers. This differs depending on the specific type of guitar, music genre, and the player’s personal preference.

If you are a novice on acoustic guitar, note plenty of resources to speed up your playing. Begin your journey through learning the guitar chords. Remember that it isn’t about the chord shapes but mastering the strumming patterns.

Acoustic guitars come in many different sizes and acoustic guitar body shapes; however, most manufacturers delineate them to families based on design, intention, volume, and size. Exact specs and guitar body sizes differ among manufacturers; therefore, there are some complicated rules you need to lean on. As a result, Grand Auditorium Vs. Dreadnought model guitars have become a common topic and source of queries. The good thing is that players can now have a clear and reasonable idea of what to expect from a particular string instrument based on its authentic style. However, there are many styles available these days wherein each is built for a unique playing style and targeted sound and volume.

Grand Auditorium Vs Dreadnought – The Original Classic and the Modern Balancer

The following relevant information can give you great insights into these body styles to better understand the difference between the Grand Auditorium and Dreadnought acoustic guitar shapes.

Dreadnought – Known as The Original Classic

C.F. Martin & Company originally designed the Dreadnought guitar style in 1916. This was intended to be louder, bolder, and bigger than small guitars played during those times. Robustness is reflected in the exclusive name linked to HMS Dreadnought- a modern and massive gunship successfully launched in 1906. Dreadnought instantly became the go-to style for acoustic guitar players. It remained the most commonly used and popular format that increased in the country, blues, rock, and bluegrass.

Powerful and loud, Dreadnought is considered a rare acoustic that can stand up to an electric band with no help. Its aesthetic is somehow boxier to reach the preferred projection. Moreover, the body is relatively deeper. Adding to the punch and power, Dreadnought usually produces strong mids and lows for full sounds forming massive chords and a massive kick into the bluegrass runs.

The body of a Dreadnought guitar is such a very iconic shape with a broad and large body. Its full and bold tone makes this ideal for fingerstyle and heavy strumming playing. The Dreadnought guitars are perfect for singers, songwriters, or anyone, mainly looking for big sounds with dominant low end.

These days, companies like Gibson, Taylor, etc. have many offerings.

The Auditorium and its Contemporary Balancing Act 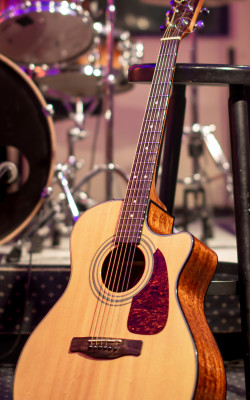 The auditorium-style guitar is a new shape that emerged in acoustic guitars. This was significantly intended to bridge the gap between the nuanced and petite Parlor and corpulent Dreadnought. Such in-between status has given the Auditorium style one notable leg up with fingerstyle and with folk players seeking to jump between the intricate picking and still maintain low end when doing some dig into the chords.

However, the Grand Auditorium Guitar is as large as the Dreadnought, with a narrow waist. The playability is similar, but dreadnoughts are mainly designed to be utilized as medium gauge strings. On the other hand, the auditorium guitars were made for light gauge strings.

Individuals usually have preconceived notions in which type of body is suited for just one playing style over the other; however, there are finger-stylists using strummers and dreadnoughts that utilize grand auditoriums. The factor determining which guitar is perfect for your playing style depends on the type of body that appeals to you the most and not what other individuals have to say.

The body dimensions of each are highlighted below:

Who Is Each Size Best Suited?

One of the significant differences between Grand Auditorium and Dreadnought is the type of user they are best suited for.

It’s best to try a bunch of different options and find the ideal model for you.

Who is the Grand Auditorium Best For?

Grand Auditorium models are a perfect choice for musicians who want just one guitar to travel with great finds. Its tone is ideal for picking or strumming, which performs well in the studio or on stage. Grand Auditorium is well-known among songwriters and singers since this can perform well with single and work with various instruments.

You can expect the Grand Auditorium to produce a clear and big sound. It is much easier to hold because of its tighter waist and upper bout. This fits perfectly well in the knee when seated and has an excellent balance when performing, recording, and even writing. The Grand Auditorium also has well-defined low, treble, and mid notes. This makes use of standard length on the fret scale.

Many singers, writers, and musicians will undoubtedly agree that Grand Auditorium is a type of guitar you should have. Even if you have many different guitars, this is one type that you will surely reach for and use more often. Many famous names in the music industry have been using this guitar. Grand Auditorium is best for fingerstyle, casual player, performer, picker, and heavy strummer. This is a guitar that musicians should have.

Dreadnought – Who is this Best For?

Dreadnought (or Dreads for short!) is recognized as the Swiss Army Knife of the acoustic guitars. This is one of the most versatile types of acoustic guitar available these days. Dreads are best suited for strummers, players, and flatpickers after the traditional shape and acoustic sound, string tension, and ample volume in the tonal spectrum. This is also broadly referred to as the ultimate workhorse and can serve you at the stage, in your studio, and whether you play with a group or solo or even at home.

This surprisingly worked pretty well for fingerpickers and was noted for its more balanced and high-quality tonal response; therefore, it can pick up even the treble notes without any difficulty. What is more, Dreadnought does not require much energy to get those big notes that other types of guitar do. If you are after a guitar with a more traditional sound and versatility, then Dreadnought is an ideal option you can get.

Now that you have learned more about Grand Auditorium and Dreadnought options, it would be easier to choose which guitar best suits you and your playing technique.